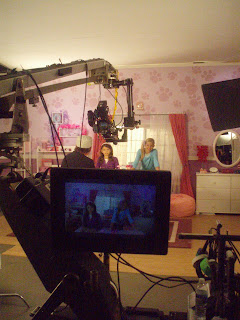 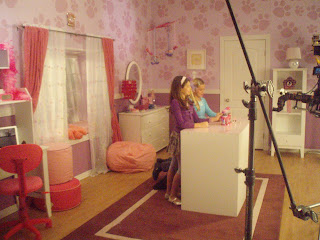 This was such a fun job....FLF Films does some of the most awesome kids toy commercials...from FlyWheels Toys to Hannah Montana...they have some of the best sets...this one looks like any little girl's dream bedroom...and FLF has one of the best crews, from Producers to the Art Department....everyone is like family there...and some of then nicest people to work with! (i loved that the art department guys were skateboarding around set!)

Even though kids have pretty great skin....especially because it's so new...they still need camera ready faces....and if HD is in the picture....look out...you can practically see inside each pore on your skin!

For kids make-up I use: (if you don't care...skip sown to the next picture)

*a foundation...a pretty sheer one (i like Laura Mercier or even L'oreal sometimes)Laura Mercier is buildable, so if you want more coverage...just go over it with another coat)

*a concealer for under the eyes and redness...I like Dermablend...it's also used to cever up scars and tattoos...

I contour, so they don't look flat on film...with usually a darker shade of foundation

*light mascara on the lashes so they show up on camera better...it's all about the expression!

*and always chapstick or in this case a sparkly lipgloss...which is applied frequently cause kids either lick it off, eat or drink something...and it's gone 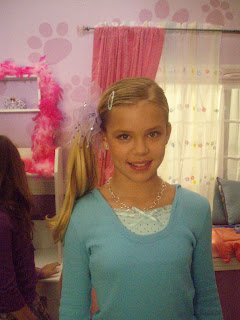 This little girlie was so beautiful...she's a supermodel in the waiting....very tall and and cute! She loved her hair..the side pontytail gave me flashbacks of me in my jelly shoes or studded white cowboy boots, circa 1985!

But she loved it, helped pick out her barrette..we had like 50 to choose from....then I hair sprayed that sucker down with lots of Paul Mitchell hair spray in strong hold...and I can't even tell you how many times I brushed that pony tail smooth!!!

I love working on toy commercials....they are so fun....and I love kids...they are some of the funniest people you'll ever encounter!

Funny Side Note: this commercial was for Puppy In My Pocket...or it could abbreviated to P.I.M.P., and one of the little girl's moms told us when they went to check in they gave them their names and asked if the room was under FLF Films.....the guy said, "no, but I have a P.I.M.P. Girl One and P.I.M.P. Girl Two"....ha ha ha ha ha

Posted by Kandee Johnson at 3:04 PM

Email ThisBlogThis!Share to TwitterShare to FacebookShare to Pinterest
Labels: FLF commercial, Puppy In My Pocket