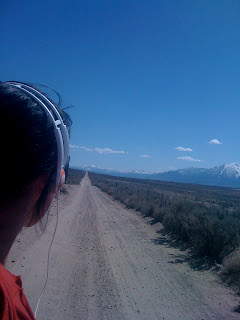 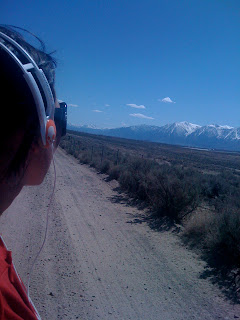 in warmer weather...this is where I run......I run really far sometimes.
I used to hate running...then it became like a therapy...I would process all my thoughts...listen to music, and when a day went by that I didn't run, I felt like i was not right.

Sometimes I would run really far, in the wrong direction, because I knew it would make my run longer on the way back.....making me into better shape.

Last night as I left a message for my mom on her cell phone....I said something, that really hit my heart...I didn't even really think all hard about what I was saying. But I told her, sometimes, we have to go backwards in life...and it may seem like, "oh no! now I'm really never going to get where I want to be!"....
but it's like a catapult.....you need to pull the catapult backwards...so it has the power to launch it's object farther ahead!

I know this feeling, when I had to move out of LA, I felt like all my dreams were never going to happen. I was going way, way, way, into the WRONG DIRECTION!!! And then I had more of my babies...and thought: "I just really screwed up my life!"......but God knew the whole time, what he was doing...
When I was put in that position, where I couldn't really work because of all my new little people, and I wasn't in LA where I could get all my work.....that's when I started the youtube videos....and I have received more blessings....my heart has been so touched and inspired...and it has been more rewarding than any make-up job I ever could've gotten with any celebrity or any movie!

If you feel like you are going backwards.....in your life, relationship, career, dreams, school...anything....just get ready, because, your probably about to be launched farther into your future...think CATAPULT!!!!

you gotta go backwards...before you catapult into your future!!!!
huge love and catapulting, kandee

this is how life is sometimes
Posted by Kandee Johnson at 11:06 AM

What an awesome analogy... I've never thought of it that way! Thank you :)

That is very true, back when I was applying for high school I thought that since I didn't get into the best high school in Brooklyn my life would be over but going to a almost as good high school was just as intellectually challenging and gave me great opportunities.

Hi Kandee,
Just like Leah said i never thought of this that way. I thought with the new year and all.. things would be different. Maybe some unfinished business.. i don't know. But its true.. think CATAPULT!!

Kandee, so inspirational, as usual!! You're such a great influence in our lives, anyone who just lets you in at least with these words through the net will be blessed!!! Thank you so much!!

Love this post... You made such a good point!

This past week had been by far the worst I've had in a very very long time, reading your blogs about life in general helped me more than I can explain with words. Thank you so much for being you & sharing that with the world!
Ari

I used to feel the same way about running, but as I got older and ran not just to lose weight but to feel free, I began to enjoy the sound of my heels on the pavement. What once began as a chore became a way to release my anxieties, get through my fear and anger. I stopped running and have gained weight but reading this reminds me of how much I love working out. Kandee you are such great motivation. When I feel blue I read your blog or visit your channel to be inspired and motivated. Thank you.

you are soo encouraging just reading your blog, encourages me soo muchh<3 God bless u!! :)

One thing I have learned today is if you can't help yourself, it's time that you're supposed to ask for it, and even though it sounds "backwards" asking for help may make you even stronger than figuring it out youself.

I have been pushing through my problems thinking if I got through them alone that it would make me a stronger person, but really, today I finally asked for a little help and he reassurance and advice I've gotten didn't make me weak, it helped me realize that I am not alone so I don't have to fight alone. Almost everyone understands what I'm going through because they have been through it themselves.

Asking for help just speeds up your win through the battle. I think we can win together.

Love this post! Thanks for sharing all your thoughts, they are very inspiring. I know exactly what you mean about having to go "backwards" sometimes before being able to move forward. This post has inspired my own post, which I mentioned you and how inspiring you are! Please check it out: http://enjoyyourself1.blogspot.com/2010/01/2-steps-forward-1-step-back.html

Nice post, Kandee. I felt like that when I quit my full time job to go back to school. I work only 20 hours a week, cannot afford to move out, so I feel like it sucks! But then I realize I'm working toward bigger things in life- take steps backward to make leaps forward. Thanks for this.

It took me forever to find out how to comment your post, it wouldnt work.
but finally!

i wish i knew you in person, you are a bright colored crayon in a box of black and greys!

I agree with everything you ssaid.

I stumbled on your youtube video of hiding dark circles (which works so great, by the way, thank you).

Anyway, I thought your videos were good, but your blog is even greater. You are a really sunny person, which is so hard to find I think. I find myself checking in with your blog often and get encouraged and inspired. Plus your messages are never condescending.

All in all, you are great! I say that cuz I don't think you let it get to your head ^.^

I'm planning on a trip to California in the fall, I'd love to treat you to lunch, or brunch!

Keep up all the fabulous work.
Thank you for making me smile.

Hy Kandee. I'm really digging the idea on your last post, because all my life I wanted to leave my home city, go to the capital for studying and make a big career there! I did that but after graduation I had to come back to my home city to be able to live with my boyfriend. I felt very disappointed but now my life is better here and I feel so happy with him :D

P.S. I uploaded some photos on my blog in which I have the CRUELLA DE VIL make up done after your tutorial. Also I applied the JOKER make up on my bf :D

It was super fun!

Oh M gee, Kandee I REALLY REALLY REALLY needed this, ive been soo stressed out an feeling like iam never gnna be able to do what i want in life, i feel that my dream will never come true an its soo upsetting. An this Post just helped me sooo muchhh! Thank yooouu! your suchh an amazin personnn!
Check out my Blog www.xclothesoverbrosx.blogspot.com
xoxo S

hey kandee :)
i cannot explain how inspiring and motivating you really are!
the past couple of months have been some of the toughest and worst times i have ever dealt with.
things seem to be going wrong for me time after time lately and when i came across this 'you gotta go backwards...before you catapult into your future' gave me loads of hope for the future. i've never come across somebody who is so positive even when times get tough, and somebody who is as understanding as you. i hope you realise you are a true inspiration to those around you. thank you for the hope and joy you bring each and everyone of us even when the going gets tough! here's to a new year and a new start! :)

I love to run aswell I just feel it clears my head I dont always listen to music when I am running and I run roughly 3 miles ....how far do you run and how often do you do it?
I have only been running since last May and I have to say I love it I just feel great after I have ran came home showered put all of my make up and scent on...my partner says he sees a whole new me since I took it up...I have had to hire a treadmill recently as I cannot run in the snow its too deep and the paths are really slippy so as soon as the thaw starts I will be back on the pavements running!!!

I meant to say I love the catapult thing I am going through some stuff just now and I reallt really hope I am catapulted into a whole new career a career that I have wanted for the last 20 years but couldnt do it...so keep your fingers all crossed for me..xx