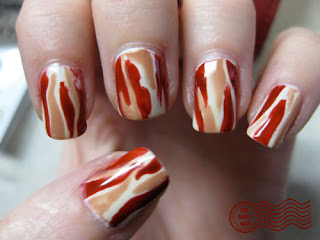 So, maybe you've tried a Bacon nail tutorial (I have not done one! ha ha) This one is from Melissa Osbourne of www.daily-nail.blogspot.com...and you're still craving more BACON in your life! 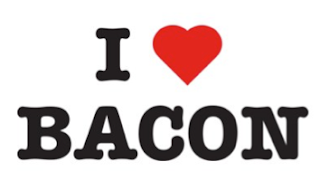 The I HEART BACON shirt in your laundry is not doing enough for your senses!


I was taking a peek at the interview about my Prom  make-up in high school (click here to read it, it's fun!) on Beautylish.com ...
and what did I see...but BACON perfume! 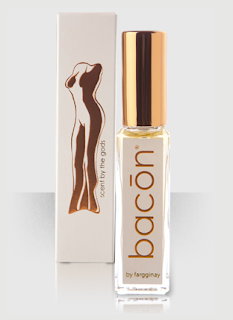 Guys and Girls can both wear this uni-sex Bacon aroma!
For $36 US Dollars you can smell like a breakfast favorite, side order...
To get your hands on a some scented sizzle of your own, go to the home of this "crazy/marvelous" potion... FARGINNAY!
AND  don't worry, it comes in 2 fragrances....Classic Bacon and Bacon Gold!
I have no idea what this Bacon fragrance smells like with the 11 essential oils....but I really want to know!

WHO MAKES BACON PERFUME/COLOGNE?!?
A butcher from Paris, John Farginnay, circa 1920...
came up with his secret BACON recipe of 11 essentials oils and BACON ofcourse! And soon had people and film stars hunting down his secret "perfume potion"!

I think Bacon Shampoo would be a hit Ha ha ha!
and then there's this guy with a Bacon tattoo....

and now for some reason I'm craving pancakes!
Now let's see what everyone thinks...weigh in on the Bacon Perfume Debate!
Would YOU WEAR BACON PERFUME?
Bacon Bits.....kandee
Posted by Kandee Johnson at 2:02 PM

Email ThisBlogThis!Share to TwitterShare to FacebookShare to Pinterest
Labels: beauty