so here's what you would've seen if you were my sidekick last night...
I had really wanted to do some crazy make-up stuff...I wanted to put bright glowing colored, striped under their eyes like baseball & football players wear (the black stripes under their eyes to keep the glare out)....and put lots of glitter on...but they just wanted sexy, clean make-up...so here's what went down... 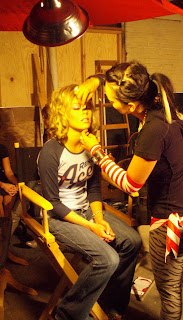 me, my chair, and my model 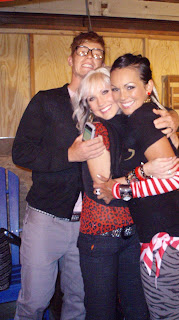 here's me and my fabulous hair-dresser friend, Bethanie Diaz, and her hubby Justin....they are the cutest "glasses-wearin'" couple.... 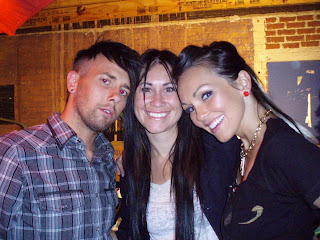 here's my and Brian (another hair-dazzler), who did  an awesome braided-side-mohawk-hair do, that I really wanted....his cute assistant that looks like, Jo, from the FACTS OF LIFE, if you are from the 80's to know that show...ha ha ha...Brian worked on the Cowboy movie with me too 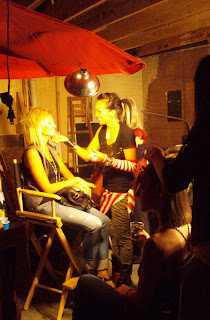 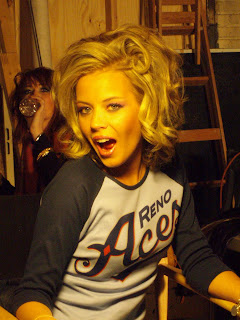 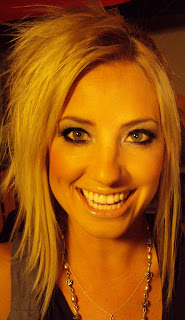 her eyes were really cool...pewter and icy-silver...but in the crapy, yellow light, you totally can't tell! 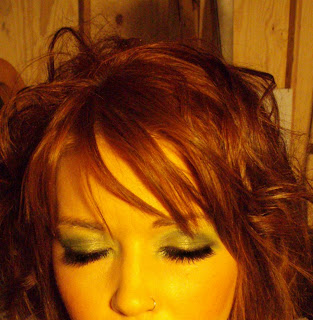 hot red hair...deserves some complimentary hot green eyes.....and again....without the help of this electric-yellow lighting...you could really tell how emerald and lime, green her eyes were!
and award for funniest outfit-I did not do her make-up....but I thought this outfit was hilarious...there were "eyeballs" on the side wings...that had swarovski crystals on them.....and her dress was so tight, she could hardly walk! had to get a picture with her! 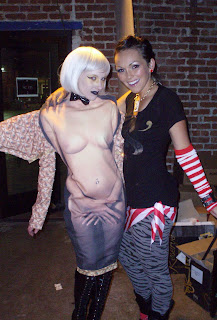 and the best part, is afterwards..this adorable guy from the Special Olympics, named Starr Saphire Diamond.....said:
I was the prettiest girl he's ever seen
I am a keeper and not a throwback
I was "a pirate...no, a sailor, pirate's are bad, sailor's are good"
and finally that he would, he would give me a rose, a red one, with stars!
and my favorite, was that he said he was going to dress like a girl, wear a tube dress, and really tall shoes that light up!
he was awesome!
Posted by Kandee Johnson at 12:04 PM

Well I think you look beautiful! The models look great!

Thanks Kandee for taking us to the back stage of your fashion show!! Very cool. BTW you can easily pass as one of their models!!!