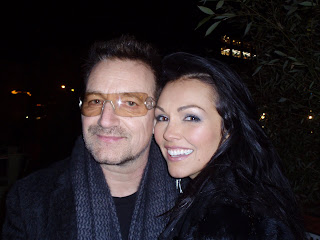 I just read that my "homeboy"  HURT his BACK!!!
Yes, Paul Hewson, AKA BONO, had to have an emergency back surgery at a Munich hospital, after injuring himself during tour preparation.

Bono, who I just learned is the same age as my mom, nifty-50, will have to recoup for the next 8 weeks!
Bono who was upset that all the people in North America who bought tickets, will no longer get to see him perform, and all their plans will have been ruined! He loves to perform, he's a performer, so this must be so frustrating for him.

Get better BONO! We're cheering for ya! Get well soon!

That just shows you, age doesn't decide your success. AT 50, Bono is beating out young teeny boppers and even Madonna, well I think she's even older than Bono, at 51!

and as a sidenote: he's not really my BFF, I just got my pic taken with him a few months ago!
smiles and it's a a beautiful day (as BONO would say), your friend kandee

Posted by Kandee Johnson at 5:28 PM

Email ThisBlogThis!Share to TwitterShare to FacebookShare to Pinterest
Labels: BONO, bono hurt, U2

oh no that sucks for him..hope he gets better cuz my mom really loves him haha i like his songs too and..hey kandee whats up

I am very sorry he was hurt! Prayers for Bono from the U.S. ...
xoxo,
kandee fam lil sis

Oh no, that sucks. Hope he gets better soon.

Awww poor guy! I hope he recovers quickly. Thanks for the info Kandee!
~Cassidy Z.
ps. I hope your leg is doing well!!

Hi Kandee. I do enjoy reading your blog however it would be a much nicer read if you used correct grammar. Try creating full paragraphs and avoid using so many exclamation marks, elipses (...), capital locks, and such things and it will feel like I am reading a real blog!
Thanks

Ohhh I love U2!!Even since I was ten I'm always wishing to go to U2 concert. I feel really bad when I missed their concert here in Dallas. Ohh! I e-mail you by the way I hope you read it..^_^

Thank you for saying "age doesn't decide your success." I am 39 years young and about to start Cosmetology school today at the Aveda Institute of New Orleans. I know I'll probably be the oldest person in the class, but I won't let that stand in the way of accomplishing my life long dream. Better late then never right?! I am so happy and excited... a wee bit nervous too. Anyway, I wanted to tell you that I've watched all your videos and read your Blog daily... you have inspired me more then you know. I love that you make every day matter, and that you live life to the fullest with so much love, compassion and honesty. Your positivity has rubbed off on me, and I thank you for that. I am forever grateful to you Kandee.

Oh my gosh how weird is it that I was listening to beautiful day as I read this post? Anywho get better bono! I love U2! I saw them with my dad last year in October. YOur so lucky you got to meet him!!

Kandee!! I absolutly love your blog and your youtube channels and you have inspired me. I started my blog and talked about you if you want to read it real quick :]

Hi honey, I watched your videos and I realy loved. I'm from Brazil and I make-up artist too.

Oh and Kandee, I loved the video of the Jack Sparrow costume, ahahah! You really got the character's style and the "talking" too. xDDD
Sooo funny!

super bummer :(
Hey guys free pant coupon on my blog for macy's check it out!
http://makeupbysnowbunny2022.blogspot.com/