Some people like to call it Tar-jay...but I'm gonna start calling it "the bullseye or "Tarzhetta" or "Tar-jay-jay" or....ok ,I can't think of any others, I'm too tired.
Tar-jay was so 1999, anyway.
Yes, I went to Target last night, and saw some super-styley and awesome accessories, hats and extras!
Now I did not buy them, well except for the hand towels, but I did love them with my eyes. 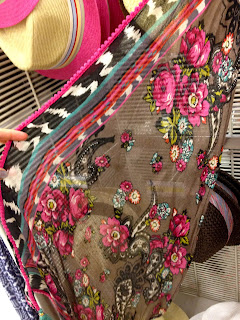 Here's some of the TARGET TREASURES that I saw in order of seeing them on my journey...

#1 Zebra-Paisley-Floral-Pink Pom Pom-Scarf- Attack!
(above) this cute floral, zebra, and hot pink "mini pom-pom ball" trim scarf- loved it! This around the shoulders would be amazing...and now I'm kinda wishing I bought it, because I think it was the only one left! 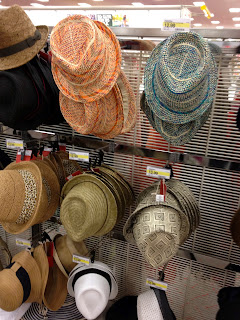 #2. Ahoy hats!
I kinda fell in love with the orange and straw fedoras! It made me think of a long flowy skirt, a white t-shirt or tank top, a low slung leather belt and hair pulled back in a messy pony tail with this cute fedora on walking along the beach! 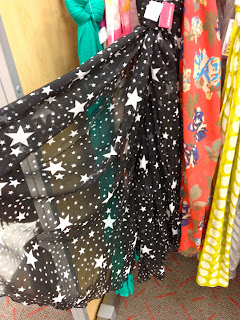 #3. Seeing Stars
This is sort of like the Star scarf I showed in my new HAUL VIDEO, that I got at Zara. But this one is from Tara-get! ha ha ha 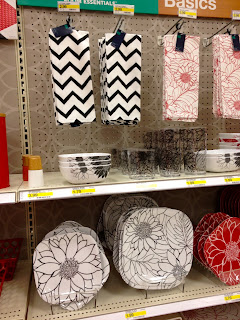 #4. Zig Zag patterns get me every time!
I love these black and white zig zag (or chevron print, however you want to describe them!) print dish towels. I actually already bought a set, but since I use them so much, I bought another! And they're only $2.99! That's a whole lotta style for under $3! 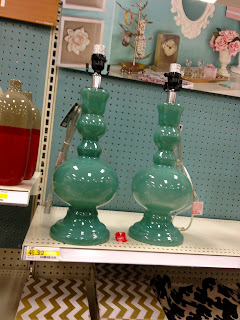 #5. Hey there turquoise lamps!
Since I get asked a bunch, where I got my turquoise lamps on my nightstand in my bedroom...which I got at Home Goods, or you might see the same ones at Marshall's or TJ Maxx or TK Maxx (as I've learned it's called in the UK!)...but you know you probably won't find more than one at those stores! So I saw these that looked a little similar at Target, to dress up your bedroom!
These babies were $49.99 at Target, I got mine at Home Goods for way less than that...but at least you know you can buy these from Target. Good luck at Home Goods, it's like hunting at an antique store there- if you like it, you better buy it, because you might not see it again! ha ha ha

Now, the only thing I did end up taking home was the dish towels...and some other random things that wanted to come live with me.

People always ask me to do a "grocery shopping" haul or a Target or Walmart haul...so let me know in the comments below if you want to see what I actually bought- I did buy some beauty goodies! And maybe I'll post it on my "other" youtube channel, TheKandeeJohnsonShow!?!

See, it's like we virtually went shopping together!
red shopping carts with bullseyes on them (that's Target's logo), your kandee

How cute, yes I would love to see your beauty haul or any other haul xx

I would as well like to see your shopping haul.

I love that zebra flowery pom pom scarf! And you should defiantly do another haul video! :)

Yes, very nice to see some down to earth low budget shopping. I Love Target and several other stores you mention. Always good to know we may be able to find the same sorta stuff and not have to spend an arm and a leg for it. :) happy shopping!

I love you kandee, would love to see your hauls/shop and tell ad you may call!

Oh how I wish Austalia's Target was the same!!! Ours is really overpriced and has no cute baby clothes or toys!! Your Target seems to be the equivilant to what we call big W though!!! :)

Grocery shopping haul at whole foods or just any store would be awesome! Id love to see a target or walmart as well!!! I just love all your videos!!

I would definitely love to see a grocery "haul" what you budget, key staples and recipes to go along would be great. I know you shop at wholefoods and I'm that person that thinks it's too expensive but wish I could afford it.

Thanks for sharing all of the great finds from Target it's my favorite store!

Please do a haul. You find the coolest things

Would loveeeeeeeee to see grocery, Target, Walmart, beauty, clothing. Oh heck any haul would be awesome! =) take us shopping with u Kandee! Haha.

Love ya and would love more eye shadow videos.Carrie Underwood eyes and others. I too love urban decay. You're beautiful.

I going to my Tar-jay 2morrow to loof for both scarves!!!

You're amazing! I'd love to see more Naked palette videos and maybe a grocery haul video.

Omg I just bought that zebra-paisley-floral-pink pom pom scarf and I absolutely love it!!! I got so many compliments the other day. :D