Now, I don't care if guys like my make-up or not...I don't care if guys like my clothes or not. For most of my life, I've worn clothes that are more "tomboy-ish" or not anything that girls typically wear to attract guys. I just wear what I like and what makes me feel happy, comfortable and confident.
However I thought it was interesting to see what guys "think" is unattractive about women and their make-up. So here is the very interesting,
TOP 3 THINGS THAT MOST  GUYS HATE ABOUT MAKE-UP (and I emphasize "most", because I've dated guys and know guys that love girls with artfully applied make-up-in any color and any amount. I even had a boyfriend years and years ago, that always wanted to watch me put my make-up on, because he said it was like watching a painter paint!): 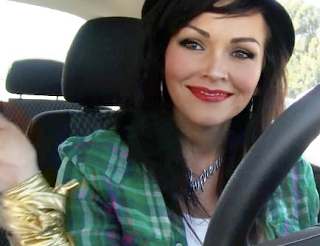 #1. RED LIPS
Guys don't seem to be fans of any red, dark, red, or bright colored lips while we're at it! But as I've asked, the problem seems that they wouldn't want it smeared all over them if they were to steal a kiss. So in their mind it isn't attractive.
MY OPINION: Yeah, yeah, I've known guys that can't stand red lips- for the very reason above, but I like it, I think it's classic and old Hollywood. And for the same reason, I used to wear combat boots and long hot pink skirts- I didn't get dressed with pleasing a guy in mind! ha ha ha

#2. LOTS OF FOUNDATION
Again, this goes back to the- "I don't want their face smeared all over my shirt" theory.
MY OPINION: I kinda agree with guys- you want to even out skin tone, not look like you have a new layer of thick, pastey skin. ha ha ha
My boyfriend in high school said: "I love that you don't wear any make-up!"...and I thought, "hey what did I do wrong, he can't even tell I put make-up on!?!"...but that was a good thing. And I only wore mascara, maybe eyeliner and some form of nude or pearl lipgloss from Cover girl! 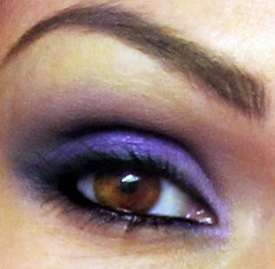 #3. BOLD EYESHADOW COLOR
Turn out fun colored eyeshadow scares guys! ha ha ha I think it depends on the application too. If I wore the purple shadow from lashline to eyebrows, that might scare me too! ha ha ha
MY OPINION: I think bold colors are fun...and just because guys might like it if girls walked around in bikinis everywhere, you won't catch me in one of those either! ha ha ha
And if you want to see how to get my "purple eye" above watch this: (you might just meet a guy that loves purple eyes!) ha ha ha ha


MY FEMALE OPINION:
Don't dress to impress guys. Dress to impress you. Dress to feel great in your own individual style. You want to end up with a guy that loves you and your style anyway.
And still, quite contrary to my own opinion- almost every guy I've ever dated since high school and beyond has said they still like me with no make-up on. hmmmm What can I say, maybe they're a little cray cray! ha ha ha

I remember when I chopped off all my hair, it was kinda awesome, because I didn't get any of those "hey, how you doin'" guys ever looking at me, I got more artsy, creative guys that liked my hair because it was different. I didn't care if guys thought I was cute or attractive. I liked it. And that's why all women should get ready to make themselves feel great! By the way....I love my hair long too because I can do more styles with it....but I some days I just wanna chop it all off- and be able to get ready super fast again! ha ha ha

Please feel free to share with us all, any other "guy dislikes" you've ever heard from guys about girls beauty...at least we can all be amused together!

Not afraid to wear neon color lipstick, even if an army of guys hate it...ha ha ha ha, your kandee

I hate it when guys say they like girls with no makeup on, but drool over celebrities who are caked in it. Bottom line: guys don't know what they are talking about, hahaha.
Hugs to you, Kandee! :)

lol this is funny, my husband gets turn on by red lips, and im lookin for a hot pink lipstick like the one u are wearing on ur fb page cuz he wants to see that on me!! Lol . bright color are ok with him too, his favorite on me is green, and as far as foundation, I dont use any soooo I cant say. Lol

I agree with you holly!

Last weekend a guy told me "don't care too much about your make up, guys like it more naturally" and I just thought "but I like it more colorful" :-D I just wear what makes me feel good and I think that way I look the best because I just feel comfortable :-) (hope anyone can understand anything, I'm from germany ;-))

Lol I think its because they "think" we are not wearing any makeup. So the "no makeup, makeup" only fools guys!! Lol

I find it funny that men say they don't like red lips. I always get so much attention when I wear red lipstick. I'm a bartender and I can tell you that my tips are always much better on nights when I go full glam.

I agree with holly ! And it really depends on the guys ... They say "I like you better without makeup" but wearing the make up is what got you in the first place !!! Smh

QwMen can't think for themselves because they have two minds that confuse each other. So anytime my husband tries to say anything I go tell him to change the shirt he's wearing because he bought it his freshman year 11 years ago Haha.

The red lipstick is so true, last Saturday I was gettin ready for dinner with my family. I asked my bf if he likes my hair he said yes. Then went on and said "but I do not like that lipstick" which I had just bought and was super excited about, now I could of got mad and took it off but I just smiled and continued getting ready.

I am blessed I suppose. My hubby LOVES red lips, he says they are sexy and he likes the idea of my lipstick being on him. He also likes bold eyeshadow as much as neutral, he says it's like having a different woman around every day. He says I am beautiful no matter what color I have on. My hubby is a preacher and he loves me in such a remarkable way. Maybe the problem with most men not liking these things is they are afraid the woman will look better than they do or get more attention ...lol!

I've always been complimented on my red lips. Always. I guess I get the men that attracted to them cause I've never been with a guy who has had a problem with it.

Its so funny because my husband hates when I wear red lips and never wants me to kiss him because of it. But I love it and always will so I keep puting it on

My boyfriend doesn't even like chapstick on me because it tastes funny even when its vanilla bean or fruity, although mint is "ok", but he also watches me do my makeup like in total awe and in the end says I look beautiful anyway.... I just think its funny how silly boys are, really.

My boyfriend always wants me to be without makeup. He compliments me when I have no eyeshadow on(which r my crappy days). But I love makeup I love bold colors and falsie lashes! I haven't stopped cause of his opinion:)

My bf is the one who buys all my makeup so I guess he has no problem. But I'm sure he doesn't like some of the things I wear he is just too scared to say. He likes to think he's the boss, good for him. Lol!!!

I love this! I have 4 daughters and always encourage them to be themselves no matter what. It's proven difficult as they get older... My oldest will be 15 next month... What's with this emo style?!? Uh! Anyway, I like wearing make up but won't bring out the artillery of make up until either A) Im going to a special event or B) after sporting the dogged tired mama style for a while, I want to feel like a woman again. My husband compliments me with both light and made up makeup but he does get this boyish look in his eyes when i bring on the smokey eyes and/ or red lips.

Lol my late fiance hated when I wore any kind of lipstick or gloss but loved my bold and bright eyeshadows his fav on me was hot pink or Orange :)

Luckily I'm single so I can wear whatever I so please and have no slack! Buut,as kandee said application has all to do with a look,I get compliments everytime I wear makeup(not being vain I swear) and even more suprising I get compliments ondays where I'm only wearing face makeup and my brows and mascara,nothing artsy or cray cray on the lids,just skin,but I suppose its cuz I focus more on skin those days and really go for the glow!

My husband doesn't really care if I wear makeup. Says I don't need it but it is true, he doesn't want lipstick on him. One thing I heard a guy say years ago, that he doesn't like is when a girl has acrylic nails on but doesn't get them filled on time.

I always got the "you have no makeup on" comments . Which was silly because i was wearing foundation, eyeliner, mascara and lipstick always. I guess it was just right.

Now i glam it up more with a smokey eye or false lashes (thanks to your videos!) And people still love it.

People call my lipstick red, it's pink chocolate, they have no idea. But whats funnier is they assume my lipstick color is my regular lip color because they never see me without it. My hubs likes it , my friends expect it and anyone who doesn't, doesn't matter in my life. It is all about being confident in whatever you are wearing though.

My boyfriend hates that I take so long when I get ready. You know, face hair and clothes. I'm not going to go out looking like a monster. Lol he also hates the red or dark lips but I wear it anyway because I like it. And its a way to express myself

the only comment I have ever gotten was that natural nails are better looking, and freakishly long hair is not attractive... my husband has only made positive comments about my hair when it is in shoulder length because he says that it looks healthy and not all kinds of crazy straggly.