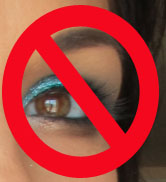 When Jordan had his friends over for his birthday, the topic came up of what they think of girls hair and make-up...
It was more about what they think is ugly rather than what they like... (ha ha ha)...so here goes,

Beauty No- No's According to A Group of 15 Year Old Guys:

#1. PONYTAILS
Apparently, none of them are fans of ponytails, in any form. (they just made hand gestures of hair being pulled straight back and words like, "lazy" and "sloppy" were used, and lots of head shaking and "yuck" faces were made.)

#2. DREADLOCKS
They said, "Dreadlocks only belong on Bob Marley."

#3. GLITTER ALL OVER THE EYES
They said they don't like when girls have glitter everywhere. (and again hand gestures of glitter from the eyebrows to the cheekbones were made)

#4. SHAVED EYEBROWS DRAWN IN WITH SHARPIE PENS
I don't know how many girls have shaved eyebrows and draw them in with Sharpie pens anymore. I think they just thought this was funny to talk about.
(side note: if you no longer have eyebrows for any number of reasons- you can "sketch" them in with a waterproof eyeliner pencil, dab a similar shade of eyeshadow to knock down the shine, and they will look natural and not like black shiny sharpie pens!)

So as long as you don't wear your dreadlocks in a ponytail, with glitter all over your eyelids and shaved eyebrows...you'd get a thumbs up from this crowd! ha ha ha ha

and there you have it...the opinion's on beauty and hair from a group of 15 year old boys...
if you are a 15 year old girl...hope this gave you an insight into boys thoughts on shaving your eyebrows...and to everyone else....maybe it made you laugh! ha ha ha
Sharpie eyebrows! They are too funny!


sharpie pens and glitter, your kandee

I have to agree with them, ponytails are a bit lazy. Unless they're coiffed and look pretty.

Hahahahahaaha this made me laugh out loud! Love u Kandee, God bless u!
JesusIsTheOnlyWay..

You should show them chescaleigh on youtube...she does amazing things with dredlocks and looks stunning :) I don't miss being 15 what an awkward time.

I was doing so many things wrong at 15! Ponytail...glitter! Good thing we all out grow that stage :)