Where the Magic Happens...or where I film my videos. 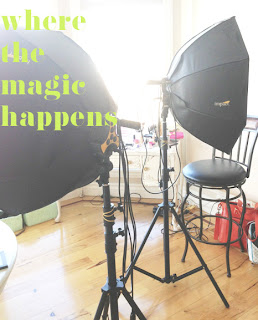 I thought it might be fun to show you a "behind the camera" peek at where, how, and what it looks like when I film a video. So here's a "butterfly on the wall", peek at what it looked like yesterday when I filmed a bunch of tutorials: make-up tutorials, a hair tutorial, we even did nails!


This is the BEAUTIFUL MESS, that covered my desk! 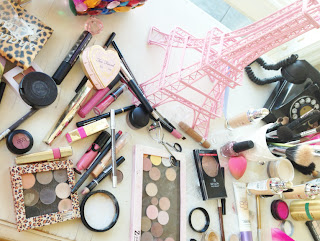 And here's a quick break down of the gear (lights, camera, and stuff I use to make my videos:
Now lighting is the most important part! And in many of my videos, especially my first ones, the lighting is atrocious. Sunlight is the best at making everyone look pretty, so I had been in search of "lights like natural window light"...and the guy at the camera shop said these would do the trick! They are no sun, but I guess as good as I can get, well, since I don't have $3,000 LED lights or anything!

LIGHTS: The ones you see above, are the IMPACT OCTOCOOL 9 bulb LIGHTS Youtube gave me a gift card to reward me for so many videos, or something a while ago, so that's when I bought those lights. 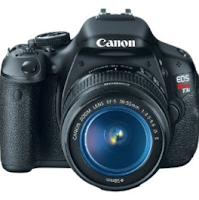 CAMERA: I have the Canon T3i Rebel
PROS:
I like it because I can take really beautiful pictures and you can make the background blurry and soft, and you can brighten it up with the lighting options, which is better than the canon "video camera" that I have.
CONS: It doesn't autofocus, and since I'm a team of one, it's hard to focus on my self when I'm sitting in a camera far away from it! ha ha So I have to put something on my chair to focus on, then run around and go sit down!
*I wish is came with a remote to zoom in and out, like my "video camera" one does.

NEXT CAMERA I WANT TO GET: 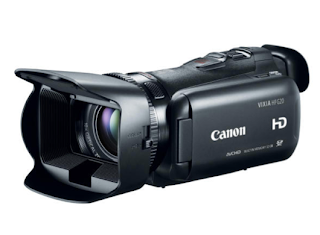 The Canon Vixia HF G10 Camcorder HD
This baby is supposed to be the bomb-biggity of camcorders, well for now anyways, until the G11 comes out! ha ha ha

WHY I WANT ONE:
*Ability to soft focus background like a DSLR (like my tradition camera).
*Comes with a remote to zoom in and out while filming yourself. I love this!
*20% improvement in low light filming
*up to 12 hours built in HD recording
*10x HD video lens
*9 cinema filters (kinda like instagram for your videos)
*And it's supposed to have a "dramatically improved" instant autofocus ability
*It's got that fancy hood that just makes you look profesh along with helping fight glare
*And the new sensor is supposed to be much better.

And here's me and the precious girls that were my models yesterday for all the tutorials I filmed! We filmed before and afters, a hair tutorial, we even filmed some nails! 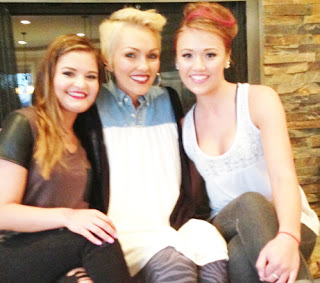 Hana, yours truly, and Shawna modeling her pink-streaked, up-do!
And yes, I'm wearing the new dress I showed you in my 36 Hours in NYC: Girls Gone Mild vlog video!

Who else is beyond excited it's Friday!!!??!!
I'll see if
I can edit one of the before and afters to upload tomorrow. Do you guys want to see a video on Saturday, or would you rather see new uploads on Monday?!?