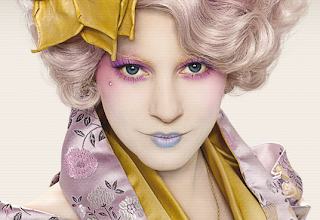 (Picture of the "fashion-forward" and wildly coiffed hair and make-up designed, Effie Trinket- this picture went viral after is was released!)
The Hunger Games, Hollywood Premier is getting close- March 23 is when the Hunger Games will hit theaters....

WIN A TRIP TO OPENING NIGHT OF THE HUNGER GAMES IN LA!
- complete with airfare, hotel and transportation to the opening night of The Hunger Games- and win an entire pro make-up kit, to play around recreating some of Effie Trinket's crazy make-up looks, you can!
Mirabella Beauty is giving away the awesome prize!!! (they give away some of the coolest prizes!) Go like their page on FACEBOOK: CLICK HERE
And enter to win!!!!! 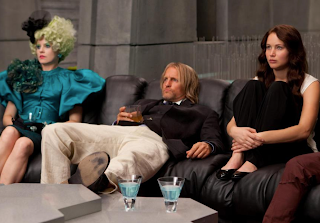 (i love Effie Trinket's make-up and hair here, with Haymith Abernathy, played by Woody Harrelson and Katness Everdeen- seen in this pic that was uploaded to The Hunger Games Facebook page)

Now, I'm not a fan of dark and/or depressing, sad or scary movies...but one of the reasons I would want to see this movie is for the creativity of the costume designers, make-up artists, and hair and wig stylists.


A FEW FUN FACTS ABOUT THE BEAUTY CREW BEHIND THE HUNGER GAMES:

1. Ve Neill, was the head make-up artist for The Hunger Games (she is also a fan of Crown Brush, make-up brushes like me!) She said they had fun creating the more fun "out-there" looks of the Capitol City people. Ve also said it was fun to switch from just making everyone look dirty, like Katniss Everdeen's (Jennifer Lawrence) look for most of the movie, to switch to Effie Trinket's (Elizabeth Banks) make-up and use fun colors like lavender Lip Tars (OCC LIP TARS !), I don't think they make it anymore, but it looks like OCC Vapid Lip Tar in a couple of Effie's looks. 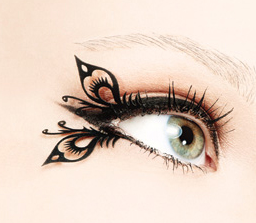 2. Make-up artist, Ve Neill, used the Paperself Small Peacock Lashes (see my blog about them from a while ago) on Effie Trinket in the final ceremony scene. You can get them at PaperSelf.com.

3. There were more than 35 make-up artists, working full-time while filming The Hunger Games.

4. The most used hair tool according to lead Hair Stylist, Linda Flowers, was the TopStyler (which had just come out when they were filming The Hunger Games)- she said it was more about texture than hair products. She would use the TopStyler to give Jennifer's (or Katniss) hair texture before she braided it. 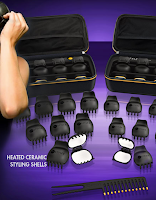 5. How did she do Katniss' braid? She did a reverse french braid (the braid is on top, instead of on the bottom, like a traditional braid), started right below the left ear and looped it around, dipping down at the nape of her neck, to her right side- so her hair would be out of the way of her bow and arrow!

6. Sneek Katniss Hair do- a helmet of braids!
Katniss will have a "helmet" of braids in the chariot ride. More than 10 different braid pieces were used, from basket weave braid, plaiting, french braids, all kinds! 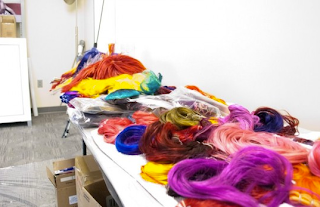 7. The hair team used, Joico Vero K-PAK color to dye the hair pieces and all the actors hair. Cherry Petenbrink (I just love her name by the way!), had to come up with over 500 looks that would look "couture" and not clownish!

8. There were over 500 extras, that needed to have hair and make-up done.

9. It took them 5 months to film The Hunger Games.

10. Judianna Makovsky, the costume designer for The Hunger Games- was a wardrobe assistant for the movie, "Dick Tracy", and got her first Oscar nomination for "Pleasantville". See, everyone's gotta start somewhere! 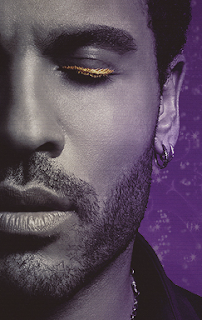 11. Lenny Loved the Eyeliner:
Ve even said, that Lenny Kravitz's character, Cinna- wore gold eyeliner that he liked so much, she gave it to him to take on tour with him! 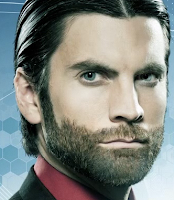 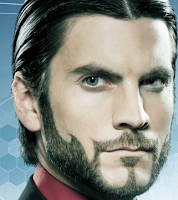 JUST LOOK AT THIS BEFORE AND "AFTERSHAVE" of
Seneca Crane, played by Wes Bentley. From bearded man- to art nouveau

I think it will be to see how creative the make-up, hair and costume departments got to be!

What do you guys think?
Do you want to see an Effie Trinket tutorial?
If so, which one, that you've seen so far- I know she's going to have tons of different looks- mostly pinks and purples with a few green and blues.

Let me know!
huge hugs...and I would write a movie called the Kindness Games- which would be fun, whimsical, happy, and probably more happy, and it would be bright...not dark at all! ha ha ha
hugs and bright things, your kandee

CLICK HERE TO ENTER THE CONTEST- hurry the contest end on the 16th!!!!

An Effie tutorial would be really awesome! And you might think this sounds crazy, but if you could do a Katniss hair tutorial that would be awesome :)

These books are amazing, Kandee, you really should read them!

Hi Kandee... This comment isn't about this post or even this blog. It's about your kandeeland page but, since I think I'm not able to comment there I thought I could do so here. I just want to say that I love reading your daily posts, I think you are such a wonderful Mommy & a good person:) Today you posted about Elyse having a playdate with a baby named Ryker & I was wondering if it's Kendra's son?It's a small world if it is. Kendra is my cousins best friend & that would be so cool if you girls were friends too.Keep doing what your doing you are such a positive and inspiring person. Take Care;) Sorry for the long post!

I am in agreement with Samantha. I think a tutorial would be awesome. But could you show the braids also? Thank you. :)

The Peacock lashes were on Katniss as well. Good job with the tips though! :)