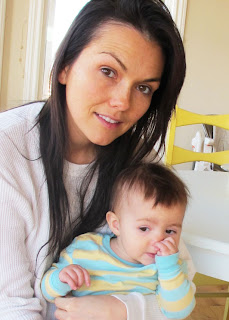 THIS MORNING:  (Photo courtesy of my little photographer, Alani.)
I looked like this.
I am sick.
As you can see, I don't have make-up on. Not only because it was right after I got up, but because sometimes I don't want make-up on...read below.

*I was supposed to film  my "gift  guide for guys" video yesterday..but due to being sick, not able to breathe, and Jordan saying I sound awful...I wasn't able to.
*I was going to stay up late last night, burn the midnight oil- to you an old phrase, and edit a "how to make a cakestand" blog...but that didn't happen due to me feeling awful, and kids waking up, because they felt awful too.

I'm going to try again today...we'll see...because this stuff is so fun and awesome....
one hint: one of these things turns old gift cards or credit cards into the coolest, rocktstar-status-coolest-things ever! Jordan said so.

So perhaps my gift guide will be sans make-up....maybe I'll just glue a beard on...and be a "guy" doing a guy gift guide...ha ha ha ha. Ok, the beard hair sounds like it would choke me more! ha ha ha

Ok, off to go drink tons of water, take all my supplements, and whatever other healthy, homeopathic alternives I can take to kick this cold to the curb.

huge love and hoping everyone reading this, is not sick like me, and if you are I hope you get better really quickly! hugs and mugs of tea,  your kandee

A co-worker ordered one of those for her son, he fancies himself a rock star too, as well as a collector of...those things, lol

Feel better Kandee! You are just as beautiful without makeup. No burning the midnight oil when you are sick! Rest, vitamins, and lots of water will kick anything. Xoxo Cassidy

Kandee you look beautiful even sick and without makeup... Hope you get bwtter real soon! Watch something funny sometimes laughter can be the best medicine. Love Jen!

Feel better Kandee... Sending you a big hug! Go eat some soup and curl up with a classic Christmas movie! May I suggest Scrooge with Albert Finley... It my most favorite Christmas movie... EVER!!! Much love ;)

I totally agree with no make-up while sick!! It feels icky! By the way feel better and you are still gorgeous without makeup on and your little cupcake is so adorable!!!

Completely agree about the no makeup while being sick..i just like to cosy up with lose bagy clothes and do nothing when im sick.

Oh my gosh girl i would pay to look like u with no make up and sick!! Girl i look like death without makeup!! Hope u feel better soon!!

Hope you feel better soon because those videos sound super fun...and because we love ya and dont want ya to feel icky! BUT your still beautiful without the make up! Feel better soon!

I feel choked with makeup on when I'm sick too. There's especially no way that mascara is going to happen. Nu uh. No way. Ps you're gggorgeous you jerk. <3

How about a DIY ugly Christmas Sweater tutorial! That would be awesome!!!!!!

I totally understand that! Plus when I'm sick I usually don't feel pretty in any way- even with makeup. Also, if you apply makeup, how can you go back to bed to get that much needed, healing sleep? :) hope you feel better soon Kandee!

1st of all I hope ur feeling better Kandee! I've been following U a few yrs. & I absolutely luv everything about U! U r so real, fashion-4ward & just a real girl like the rest of us; whether it be makeup,hair,fashion or a mama w/kids, U r an absolute breath of fresh air! Btw, I got the O so yummy basil scented Meyer's products U recommended-LUV iT! =) And I think ur gorgeous