First Costume Look of the Year!! 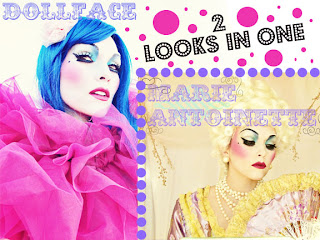 YAY! YAY! Finally- after 2 weeks of editing until 4am- 2 trips to the Apple store to fix my computer- and severe lack of sleep--- may I excitedly (ridiculous amounts of excitement on my part actually)...present to you...a special 2 looks in 1!!!
The Doll Face look~ 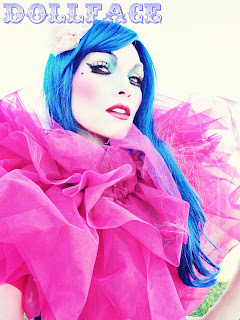 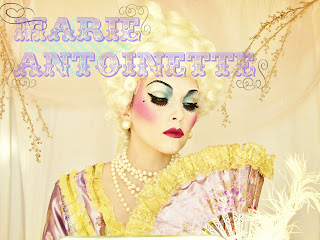 the best part of this video is that with a few simple changes of costumes, wigs and accessories you can have a whole new look!

Here's the make-up I used:
FACE
Pore Perfecting Primer from Urban Decay
Illusion Cream Foundation from UD
the lightest color in the RCMA Shinto Palette (any pro or theatrical make-up place will have this)
any white eyeshadow as the face powder
BLUSH
I used Woodstock eyeshadow from Urban Decay (I'm kinda addicted to this color right now)
EYES
Teal Eyeliner in Junkie  from Urban Decay Travel Liner set
Since everyone has been asking...I used color from the Book of Shadows and the 15 Year Palette from Urban Decay too!
From the 15 Year Anniversary Palette
Teal Eyeshadow  in DEEP END
Black shadow in Black Out
FROM THE BOOK OF SHADOWS 4~
Lavender-blue eyeshadow  in BLUE BUS
Silver-pale powder blue shadow  in CRYSTAL
A vanilla-buttery-silver called Zephyr
any black liquid liner and black eyeliner- I used Perversion Liquid liner from UD and an angled brush
LASHES
any mascara - I used the Curling Mascara from Urban Decay because it helps the real leashes "stick" and mesh with the fake lashes...
FAKE LASHES (all from Urban Decay because I love them!)

on top lashes-
first I put the SLY lashes

EYEBROWS
I used Elmer's Glue sticks to conceal the brows
And pearl decorative strips from Michaels and just some eyelash glue to stick em down
LIPS
One of Gwen Stefani's must have lipcolors...and mine too:
GASH lipliner and lipstick from Urban Decay


*And I'm so excited because I have been a fan of Urban Decay for 15 years, when they first came out!  So this year when they asked if I would help create some special looks and offered to send me anything, I don't already own (ha ha ha) to complete the looks, I was so excited!!!
I want you guys to know....I WILL NOT do any paid reviews, product placements, or post. I will only do video and post about things I REALLY love. So just so you guys know, I was not paid to tell you I like Urban Decay! And I use some other products in these video too. I am honored that Urban Decay asked me to be a part of their costume looks. And if I ever were to be a spokesperson for a make-up line....I would love to be one for Urban Decay! Because I've been using them in my videos for years now! And no they never paid me! I just love em! 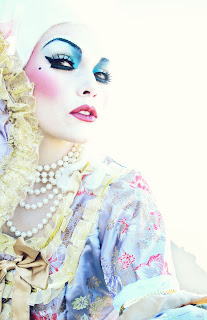 I just put on a bunch of pearl looking necklaces and secured them with a safety pin in the back.
The costume came with the fan and the feather to clip in the hair.


MARIE ANTOINETTE COSTUME & WIG:
Costume -it's way too short, but I just needed the top, it's kinda one of those "sexy" costumes but I would never wear it out unless I added a huge skirt to the bottom! ha ha ha
CLICK HERE TO SEE (it came with the fan)
WIGS: (just a warning...neither one of these wigs looks like the picture on the package! ha ha ha)
MARIE ANTOINETTE wig #1: 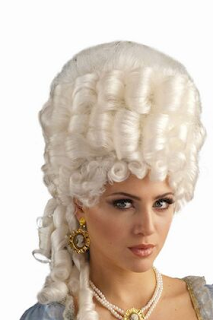 
DOLL WIG
Which is a blue Katy Perry Wig

I got from AMAZON -CLICK HERE FOR THE LINK
This one was an awesome surprise because it looks even better than the picture! I love this wig!!!

FOR THE DOLL COSTUME: 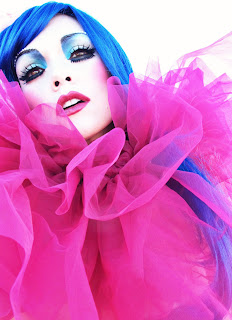 I just put a hot pink tutu around my neck.
I put a pink tulle rosette hair pin in my hair (I can't remember where I got it though, it's old)
You could use any baby doll costume.
And I put lots of sparkly bracelets I got at Charming Charlie.

I hope you guys love this look as much as me! Can't wait to reveal the rest of the looks this weekend and next week- finally!!! You're gonna love the rest...they are nothing like this one! hee hee hee

huge hugs ...and running on the vague remembrance of what sleep was...ha ha ha
your kandee

I would love to see the rest of the blue wig doll face costume. Please post a picture its a great idea and i love your videos