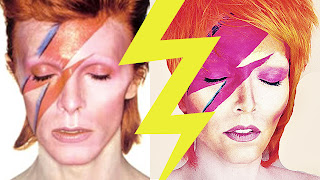 long before Lady Gaga had her lighting bolt....Ziggy Stardust was inspired by Elvis Presley's Taking Care of Business ring, which had lighting bolts on both sides: 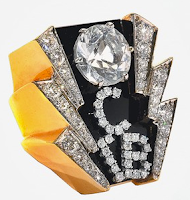 and when they were in the studio, they saw a rice cooker with the lighting bolt and DAvid Bowie's male-up artist, Pierre LaRoche replicated it's color and design onto David Bowie's face.
So now I present, my GLAM-take on David Bowie's Ziggy Stardust look!

I had 2 wigs, one red and one more orange....neither one looked good with the red color on the face...so I went with an EVEN more GLAM....hot pink!!! 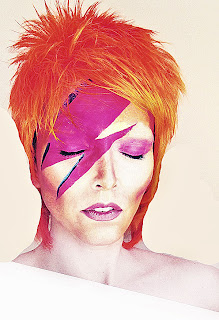 Come to GLAM ROCK town with me to get the iconic, David Bowie - Ziggy Stardust make-up, from his famous 1973 (long before I was even born), Aladdin Sane album.


*And I'm so excited because I have been a fan of Urban Decay for 15 years, when they first came out!  So this year when invited me too be featured on their website with my  costume looks, I was so excited! They did not pay me for this, but they did  offer to send me anything, I don't already own (ha ha ha) to complete the looks, I was so excited!!!
I want you guys to know....I WILL NOT do any paid reviews, product placements, or post. I will only do video and post about things I REALLY love.
I've been a die-hard Urban Decay fan for years and have been using them in my videos for years- and have never been paid to do so.


FACE:
Face Primer- I used URBAN DECAY BRIGHTENTING primer
Any light foundation you have
Eyeshadow Primer- I used Urban Decay Shadow Priming Potion
Highlighting Pencil -which I just used a concealer pencil from Urban Decay in  CIA
Dark Contour color- I used a professional palette from BEN NYE Pro Foundation Palette in Au Laite
i shaded and contoured the face to match his photo- with a dark hot pink eyeshadow (I used Woodstock from Urban Decay)

*David Bowie used lots of rice blotting powder - which I couldn't find in my house, so I just used the De-Slick Mattifying Powder from Urban Decay.

ZIGGY LIPS:
I just swiped on the same REVOLUTION lipstick
then made it lighter and more coral-y like his picture with PARANOID lipliner from Urban Decay

There is actually a nail polish called ZIGGY in the HOLIDAY POLISH SET Urban Decay's , it's the same color I wore on my nails at the Emmy's...it's amazing!

TO MAKE IT LAST:
USE A FINISHING SPRAY TO MAKE SURE YOUR LIGHTING BOLT DOESN'T GO ANYWHERE!
For a finishing spray you can find anywhere: use ALL-NIGHTER from URBAN DECAY
For a professional finisher: try MODEL IN A BOTTLE

ZIGGY STARDUST WIGS:
I tried 2, one that was red and the orange one looked a little better:
They are from: MYCOSTUMEWIGS.com CLICK HERE FOR THE ZIGGY WIG PAGE

Now let's get all Ziggy and Wiggy..come watch the tutorial-

Hope you like my "glam take" on Ziggy Stardust! You can feel like a glam-rock star too! hee hee
hugs and lighting bolts of glamtastic-ness...your kandee
Posted by Kandee Johnson at 12:09 PM

love love and even loved the look...from israel with ???love...2bad we dont have UB here

So delirius! I like it and your face looks so smaller! Great job kandee once again. I like your creativity and open mind! Xoxo lilee from france ... Please give me advice to be like you!

Please please do a chucky tutorial!!! :)