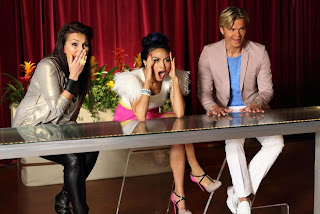 Yes...we make these faces and more....
Me and Kim Vo, celebrity hair stylist, will be joining Jeannie Mai, host of HOW DO I LOOK on the Style channel.


who? what? why are we making these faces...we saw some crazy things (things I don't even know if  they'll show) when people were auditioning to get a make-over on How Do I Look?

Kim did the hair make-overs, Jeannie does the fashion, and I did the make-up part of the make-overs!

Now the 2 hour special is called , "America's Worst Dressed"....but I think the show should've been called, "Who deserves a make-over the most", because the stories of the women who are the final 3...had amazing stories and they REALLY deserved make-overs!

This show is not about telling people they don't like what they are wearing, but about revealing these amazing people's hidden beauty that they have been afraid to show and some that have been hiding behind a certain type of clothes because they didn't feel good enough.

And I could not believe the amazing things they show did for each of these people! You guys have got to see! I was crying at pretty much each reveal!

Kim Vo letting me sit in his first class seat with the baby. Because I did not have a first class ticket.
Kim Vo pushing the stroller through the airport.
Jeannie Mai carrying my purse and diaper bag while I carried the baby.
Laughing hysterically everyday with Kim and Jeannie.
Kim Vo helping me do my hair in the back of a store when I had 2 minutes to do my hair with no tools or mirrors.
The orange turtleneck sweater I am wearing in one scene is not mine, I didn't have enough clothes.
Me telling everyone I loved their outfit no matter what everyone else thought or wanted me to say- when they stopped filming...ha ha ha (I even liked the lady with the red hair and cat suit's style, that said mean things to me!)
That my mom and baby were standing not far from where we filming each scene.
Me talking with each make-over person...and realizing how much we had in common from being single moms, being in bad relationships that made us feel awful, to not having the shape or money to afford the outfits we wish we could wear.
The amazing updates from the women about how their lives have changed for the better since the show!

I really did love everyone's style...I love independent style, individuality, I loved seeing everyone's unique things so much. But they made me realize that even if I liked the girl with the black lipstick and that only dresses in costumes or the lady that only wears fairy wings, or the girl that carried baskets with her to sell her "illegal" brownies...are having troubles getting the jobs and relationships they want because of how crazy people think they are based on their outfits. And sure enough, whether the cameras were rolling or not...many of these people had deep hurts and that really they wanted to change how they dressed or they didn't have the money to change their wardrobe even if they wanted to.

Jeannie Mai looks amazing, she has an amazing wardrobe team and wardrobe.
I just had my normal clothes- you will notice a few familiar shirts I've worn in videos before or in my blogs- no where near as stunning as Jeannie!

That they are going to show the parts when they were having me do my "say something about their outfit-you-don't-like-because-you-can't-tell-everyone-you-like-what-they-are-wearing" exercises.

Jeannie and Kim Vo are already thin and look great on tv....I just had a baby a few months before and do not feel as slim as my two sidekicks.

And I have no idea how I'm going to look...I have seen nothing except for the previews where I just think I look not-very-fancy! ha ha ha

And one scene the producers had to send someone to tell me my Spanx were showing...awesome.

The only thing I'm not nervous about is: my make-up


watch it with me...tomorrow night
HOW DO I LOOK
OCTOBER 17th, MONDAY at 8/9 Central time (I have no idea what Central Time means to everyone) on
ON THE STYLE CHANNEL

Posted by Kandee Johnson at 1:22 AM

I won't get to watch it till midnight

I had the style network on my tv from last night. When I got up and was reading this blog and turned on my tv guess who was on??? Kandee!! Its so exciting

Kandee I hope and pray you read this. I want you to know that you are amazing. We all follow you and love you FOR YOU, for not having wardrobe and tons of stuff. Your beautiful and you show that people with not a lot of things and money can make such amazing things, everyday, just by being us. Just like you. Don't stress. :)

I can't believe the first lady thought you are 40 Haha. You're beautiful

I'm watching right now and it's like watching an old friend :)

Hey Kandee! You have such a beautiful soul!! It is so amazing, and without even knowing you I feel so proud to watch you accomplish your dreams. You are such an inspiration for so many young girls including me. You look stunningly BEAUTIFUL so you have nothing to be nervous about :). God bless you and your precious family! Keep up the great work. Okieee now back to watching you on TV!!!! - Daniela M.

I'm watching it now. Had no clue you were going to be on it but I was very excited to see you!

You were amazing and so sweet! You looked fabulous!! Great job!!!

Hi kandee, Denise the bounty hunter here,I just wanted to say what an awesome person you are. Keep you head held high. Say hi to mom and baby for me. :-)