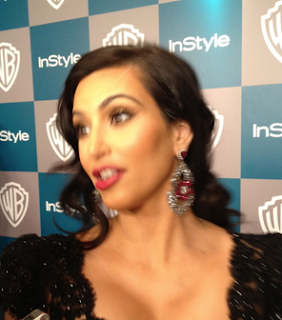 (more blurry pictures below...ha ha ha)
So, I thought it would be fun to make a "Golden Globe Weekend" wrap up video-vlog and tell you guys about it a little more than just a blog post on here! I really feel like I  took you all in my heart. And I tried to take pictures to show you all the things that made it feel fancy!

I forgot to mention all the stars that I got blurry, horrible pictures of! ha ha ha

So here's my "VIDEO WRAP UP"....look below for some other "blur-tastic" photos I forgot to include in the video!  Get comfy for a second and come hang out with me, just click the little arrow to
play:


I forgot I saw Charlize Theron when I was leaving the HBO & L'Oreal Beauty Suite...with a bright lip color and yellow flowy dress.

Here's some of the super blurry pictures I got: 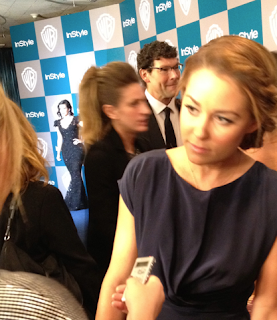 Blurry, Lauren conrad, with Kim Kardashian in the background. 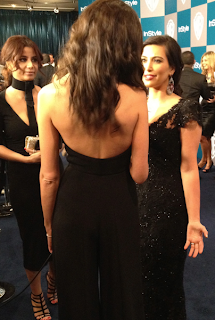 Look how tiny Kim Kardash is, she's like a little doll. 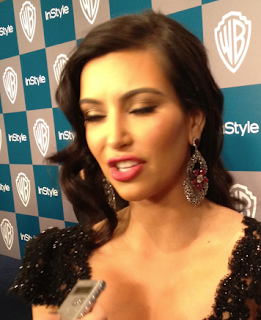 And my blurry, picture of her. She still looks pretty, I think. 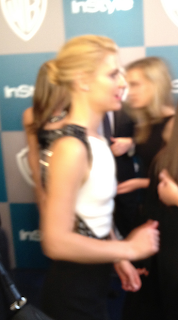 Blurry, Claire Danes, and I just watched some of, Brokedown Palace last night on tv! 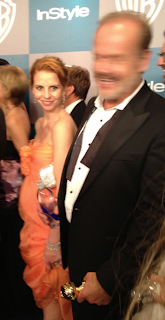 Blurry Kelsey Grammer, who won a Golden Globe, also announced he and his wife, Kayte (in the orange dress) were expecting twins. 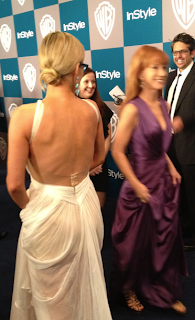 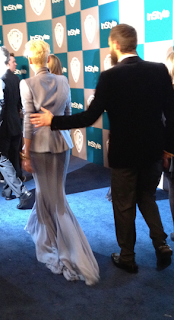 And a semi-blurry picture of the back of Tilda Swinton.

I was exciting for the girls I was with, that got their picture with Brad Pitt and Angelina Jolie. My phone had not one picture of either of them, but I honestly think, Brad Pitt, is the one person that I would be a little nervous to ask about taking a picture with! Probably just because I've thought he's so cute, for years. They said he was really nice.

And I saw Kendra Wilkinson and Brad Goreski (from It's a Brad, Brad World), but they were getting mobbed by people!

Hope you likey the video! Huge hugs and I would truly be more honored to meet any one of you, than any celebrity there! Celebrities are just people that many people know their face and name, but your hearts mean more to me than a well known name or face. I love you.

"fame is fleeting, names get forgotten, but a person that has touched your heart will never fade away"

huge hugs, and  where ever you are today, I  am imagining a red carpet under your feet, your kandee

SEE My KNIGHT IN SHINING ARMOR  * FACEBOOK ME * TWEET ME * MORE VIDEOS
Posted by Kandee Johnson at 11:44 AM

That's soo nice of you Kandee posting everything your doing I was waiting for you videos this week I kept on going on youtube to check if you had upload. Some videos but NO!!! Til today .. I love the picture you took of Kim Kardashen.. That was pretty nice of you .. lllllllooooooVVVVeeee YYYYYooooUUUU KANDEE hugs from. Mexico

I would like to see yojr make up video kandee . So please show it . <3 you and thek you

Hi Kandee!! I absolutely love u and ur videos! You are such an inspiration and a total sweetheart! Thank you for all you do! I can't wait for your next tutorial! Your the absolute best!

Aww kandee you are a real spectacular girl. I can truly admire you, because you are always so nice, and the best part of all is that you are always so energetic and with a smile on (: thank you for devoting your time and effort for the people whom you do not know. You are awesome period end of story(:

Love the photos kandee looks like a goodnight had by all

Yes yes yes please share your video of getting ready for the event!!! I really want to know how to make it look like I have a deeper eye socket (crease) and you said you did that in the video! Please share! I miss your makeup tutorials! Love you!!!

Yes! Thank u for sharing! U didn't have to but u went the extra step to do it for us!! Always wondered what it was really like through another's non-media camera lens...very generous of u, kandee!