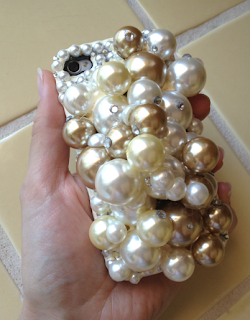 My sister makes the most awesome phone cases for herself!
The pearl phone is amazing! She siad- look at my ugly phone. And I was like- UGLY- are you cray cray! That is AMAZELY!!!!!
I showed her old phone case, that was pretty awesome too on my Kandeeland blog- HERE. 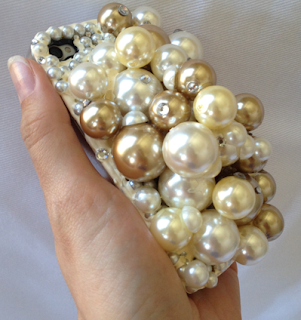 I had to take pictures and show you guys her awesome phone cover!
Here's how she did it:
Cheapo Dollar Store Phone Cover
Bag of Pearl Beads from Michael's Crafts
A few Swarovski Crystals from Michal's too
(PS. if you don't have the Michael's App on your phone- get it, they have coupons everyday- like 40%- we love it!)
Cream colored puff paint.
Any super adhesive like,
Gorilla Super Glue Impact Tough Formula (it is super strong, in case you drop your creation!) 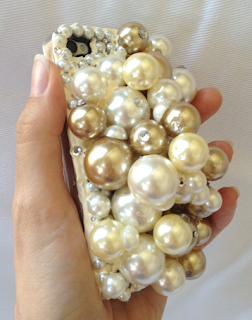 #1. She glues the larger pearls in a "piled" up formation first.
#2. Then, glued the smaller pearls to fill in the gaps and around the edges.
**** Be careful when gluing around the camera area, so you don't pull any pearl in the way of where you'll take pictures! ha ha ha *****
#3. She glues the crystals on the pearls where they have the holes (since they were meant to be strung on something like a necklace- but not for this project, baby!)
#4. Lastly, she covered all the edges and in between the pearls with a cream colored puff paint. 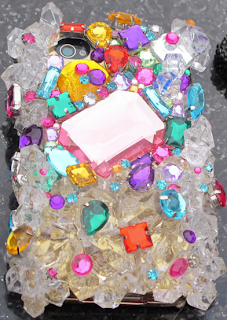 I told my sister we could have filmed a video...like a "CRAFT-OFF" and we could have both made ridiculous phone cases and you guys could vote who won!
But since she's due any second with her baby...we may have to wait! ha ha ha

phone cases so big you can use them as self-defense, kandee

Wow! Those are true works of art!

That looks cool n all, but uncomfortable to hold n talk, in anyway.
Take up alot of space in a purse, too.
Hmmmm, just not sure about that??

Wow! So pretty & elegant! But isn't it a bit uncomfortable when using the phone? If not, I think I'll try making one. ^^*

I love it!!!!! I love everything sparkled, glitter. Pearled phone cover is fancy& fad!

Kandee. Please tell me where ypu got those beads on your old case? There sp pretty they look like rock candies! Please if you ever have time let me know!!

There was an old tv show that I loved called "craft corner death match" it was awesome right up my alley but sadly it was short lived. I abso love the craft off idea!

Can u make a video on making your own phone cover

iLove it! Are you girls willing to sell me one?