Did you ever own a pair of these babies!? 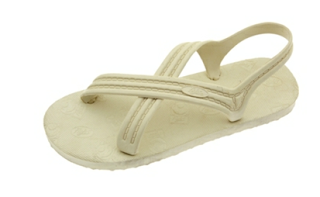 This is a Flojo. Pronouned: FLO-HOE

I had a pair of these when I was little. They may look goofy, but they are as comfortable as a slipper and and squishy as a cloud. Now they are not as goofy looking as some other shoe trends I've seen! ha ha ha

But I'm contemplating buying another pair and making them cool again! ha ha ha
I don't know if these were as popular on the East Coast as they were on the West Coast- they were a popular "beach shoe".

If you feel your feet are hankering for some soft, cushiony, rubbery, foot heaven....you can help me bring back the Flojo too!

Me and my sister would joke and say it: Flo-joe...just to be funny, But that's about at right as calling a  TORTILLA (tor-tee-ya) a, TOR-TIL-UH.

and for those that are more into sleek black shoes....
ka-blow!
may I present FLOJO in black....tres chic, eh!?? 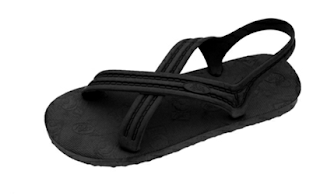 and they are only like $21 dollars- see I found em HERE.

Would you rock the Flojo with KanJo? But you have to pronounce the J....KAN-JOE....not, KAN-HOE...that sounds bad. Very bad.

And my mom loves these because she can't stand wearing anything between her toes! ha ha ha Maybe that's why she bought them for me and my sis when we were little?!?

summer sandal time, KanJo (in this case, we are not defaulting to the Spanish J sound...ha ha ha)

LOOKEY LOOK WHAT ELSE I PUT ON THE WWW:
MY FACEBOOK IS HERE  *  MY TWEETS ARE HERE  *
AND MY NEWEST YOUTUBE VIDEO BIT OF FUN IS HERE
Posted by Kandee Johnson at 12:21 AM

Hi Kandee! I love your blogs and your videos! I know you love requests, and I have a great make up look I would LOVE for you to show how to do! I love Beyonce's makeup in her video "check on it". I love the makeup look she has where she is wearing the white suit. Its so beautiful and fresh but sophisticated as well. I would love to do it and thought you would be the best at showing how to do it! Thanks again, I love your style and makeup recommendations!

OMG, I totally forgot about these bad boys. They would sell them in Mexico a lot when I was a little girl. Haha I remember they were not good for running though, haha my foot would come out through the sides lol. I don't know if they still sell them over there, I guess I would have to find on my next trip ;)

Oops I meant find out hehe