When Tattoos Get Older.... 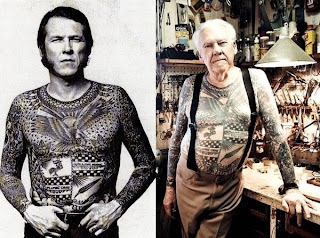 (src: pinterest Lyle Tuttle, a tattoo artist, who began tattooing in 1949)
Ever wonder what tattoos might look like when someone adds a couple decades of birthdays to their age?
I remember when my grandpa was still alive  and I would look at all his "sailor" tattoos, he had an anchor on his arm...and wonder what they looked like when he was young- they were then all kind of green-ish, blue and dark grey-ish.

Look at the handsome, young tattooed fellow on the left....and how his "tattoo" shirt...had stood the test of time. Honestly, you could take his young picture and he'd look like he'd fit right in with modern day young guys, hair style, pants and all!

And now I know, beyond just my grandpa...what tattoos might look like 20, 30, or 40 years later...
I kinda' think he looks like he could've played a young "Rebel without a Cause"- James Dean type-character in movies, don't you?!?

I have no tattoos but I've got one giant scar on my leg (ha ha ha) , your kandee

Wanna see the must have thing everyone should wear? click right hee-yah
Posted by Kandee Johnson at 12:49 PM

Hey Kandee, thanks for sharing this. I have tons of tattoos, and people always ask "what will happen when you get older?" Well just like this man I will be old, wrinkled and tattooed, and very proud of it! Now if only we could get people to stop passing judgement and descriminating against people with tattoos it would be awesome. Can't wait for the day that my boss can't make me wear long sleeves to hide my true self from the patrons of our restraunt.

I think he looks well. Makes me feel good about getting more lol :) x

He looks like Bill from true blood in his young picture=}

I thought that too! He definitely looks like Bill Compton (Stephen Moyer) from season 1!

Whether a person has one tattoo or a arm full, its a art form and also tells a story of someones life, i have a few and would love more. The person who doesn't have any @ 80yrs old 40yrs from now will probably stand out more, and people should except them, like i say if you don't like them don't look there is more to life than to stress about someone having tattoo's.

He still looks great! Thanks for blogging this. I have quite a few tattoo's and people always say I dont look the "type" I love tattoo's. They are like my jewerlry. Everyone has a special meaning and they make me, Me :)

I think what people forget is that when You're old, no one cares what you look like. The body is a temple, why not paint the walls? :)

I am very proud of all my tattoos !! hate the fact that society judges me as a bad mom because of my tattoos. I will love my tattoos more as I grow older because each one has a special meaning. Love that you shared this!

You should get a nice memorial tattoo for your dad, I got one for my boyfriend that passed a couple years ago and no matter how old you.get the meaning will always be the same =)

I have one tattoo on my upper shoulder and i tell people i will regret it only when it slides down to my elbow. Lol!