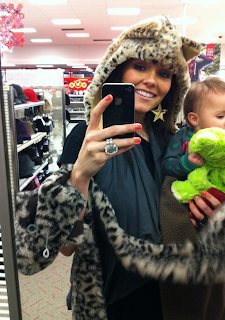 (I loved these cool, faux fur, animal print hats. One had a long scarf-like sides that hung down with pockets to keep your hands warm)
Some bloggers show you glossy, well-lit pictures of them traveling all over the world -sips of tea in London, an eclair as they stroll around Paris, in shoes that are ridiculously impractical to walk around in. Maybe even some exotic winter fur hat they've found, that costs hundreds of dollars from some brand you can't pronounce....
and then there's me.
I go to Target or Wal-Mart...because they are the closest stores I have. I take badly-lit pictures, void of all exotic locations, with my iphone. ha ha ha

But I think I find cool things that people always ask where I got, and they'd never guess where I found my cool treasures for cheap!
The most awesome thing I saw, though....were these babies... 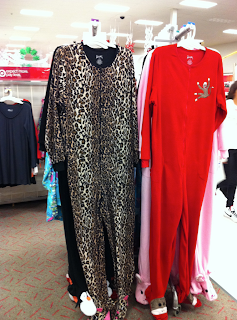 Giant, adult sized footie pajamas. And if you were thinking, "man, those are not attractive"....may I point out the "almost-as-sexy-as-Vicoria's-Secret-leopard-print" one! ha ha ha

If you don't live near the coolest stores in the world, like me...and Target and Walmart are your escapes...you're not alone. And some of the coolest things I've found came from a vintage find at a thrift store, or like the zebra leggings I wore to that red carpet event, that I got at Kohl's, and one of my favorite belts of all time, that I've been wearing for years, came from Ross.
*Ross, is a discount store that sells all kinds of stuff that you'd pay way more for, like I got a pair of Royal Elastic shoes there once for $11!

Bad lighting in pictures and photos taken by myself..... your kandee

OH MAN! i saw those same exact jammies at Target. My family and I pronounce it Tarjay. Like its exotic and foreign. Ha ha. I some years ago bought, owned and wore these adult allover jams from Nordstroms for $25! Which is rare...but like you, I shop at Tarjay, Ross and Walmart, and that's alright with me.....

Kandee, you are amazing. And truly vintage yourself! I've been following your blogs & YouTube accounts for years now. Never change cause who you are is truly inspiring and uplifting. Thank you.

P.S. All though I have malls and such where I live, I must admit...Target and Wally World are some of my favorite places for shopping adventures :)

You keep it real with flair, Kandee!

Umm I just wrote a comment and I Have to write it again! Oh man, this iphone.. Well, I was saying, what was I saying? Oh yes, I like those!! The only issue it's imagine when You go to the bathroom in the cold middle of the dark night, and pulling out to sit down! So cold!!!! Maybe If I put a warmer the problem it's solved! Now, I have to save to buy it! He he! Because There are so many things in my wishlist! But not too much money left!!!
Well, TY for the iPhone pics! I don't mind! I like them!
;)

You must have really buff arms for carrying your little one a lot haha...you should of gotten her used to sitting in strollers and such so u wouldn't have to hold her everywhere u go. I have four too but she eventually needs to give ur arms a rest sooner or later!