Why I want to pull all my hair out! 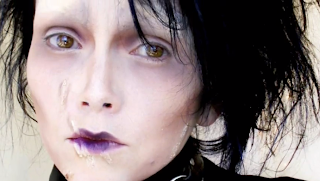 #1. Because I have spent the last two weeks filming costume looks and now they are stuck in my imovie program that won't open.

#2. Because after driving an hour to the apple store last night and they guy said he fixed it- it's still not working.

#3. Because it takes me days to edit the videos from an hour or so down to a 10- or 15 minute video -which I have to watch that 1.5 hour video in pieces over and over again, which feels like I watch 40 hours of that video and I get sick of hearing my own voice! ha ha

#4. Because I tried to have a schedule for my videos and now it's completely out the window!

#5. Because I forgot I didn't even have time to edit my video I filmed while I was in NYC Fashion Week.

#6. Because I didn't even have time to get my "back-to-school" make-up video up!

#7. Because I didn't even get the video on how to zap a zit for back-to-school up.

#8. Because maybe on second thought I don't want to rip my hair out because that would give me another set of problems.

#9. Because I have a "challenging" amount of work that needs to be done like yesterday.

#10. Because I have hundreds and thousands of emails that just keep pouring in and a humongous list of calls I need to make...

#11. And finally because...crying on floor curled up in a ball is not an option. And all the  Ben & Jerry's store houses don't have enough ice cream for me to consume-away my problems.

----until my computer is fixed and I can edit my costume looks until 4am in the morning every night to get them up in time...
I will be uploading some of the ones I needed to upload the last 2 weeks while I''ve been filming costume videos...! Do you see the vicious-video cycle! ha ha ha


*and as my dad texted me yesterday, "challenge is the correct word instead of overwhelmed. It makes so it's not a problem- and not so negative!...just say you have challenges!"

I don't even have time to eat ice cream...I gotta go try to fix all this!
I love you more than I thought I loved the guy that thought he fixed my computer at the Apple store last night.... your kandee

PS....
I went to youtube to grab this picture of Edward Scissorhands- "you know, "pulling hair out"...cutting hair out...costume looks...I though it went well..ha ha ha...
here's this video if you wanna see it...good ol' Eddy- at least it some costume video to watch! arrrgh